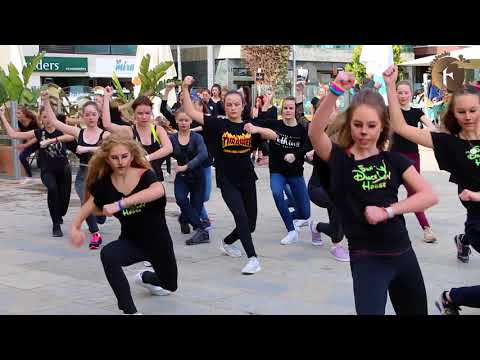 From 18 to 22 March 2018 in the Spanish city of Lloret de Mar hosted the international choreographic contest-festival “Dancing Catalonia 2018”, which gathered all the best dance groups from many countries on the same stage.

The organiser of this contest was European leader in organisation of worldwide festivals and competitions “Fiestalonia” in cooperation with Town Hall of LLoret de Mar.

The participants of this dance festival were received by the representatives of the team of Fiestalonia and accommodated in comfortable hotels: Samba, Gran Hotel Monterrey & Spa and H · TOP Royal Star & SPA.

The contest took place in the municipal theater of Lloret de Mar, where each participant had the opportunity to show their dance skills to the professional jury, which included Irina Khrebtova, María Rovira and Yadira Olavarria.

Within the framework of the contest-festival all the dancers took part in the master class “Afro-contemporary” by Yadira Olavarría, a teacher and a choreographer, a prima ballerina of the American Musical Theater in Havana. Talented contestants worked seamlessly with strong and smooth movements of the body, inspired by the nature and energy of animals. The result of their joint work was an incendiary dance flash mob next to the Town Hall, which was captured on camera and made a part of the video report of the contest.

The dance of bright emotions and strong feelings, where the participants of “Dancing Catalonia 2018” were able to release their hunter’s instincts, was a wonderful start of the enchanting gala concert.

The awarding ceremony was a joint event for “Dancing Catalonia” and “Golden Voices of Montserrat“, two contests held in parallel by the team of Fiestalonia in Lloret de Mar.

If you want to become a part of something great and exciting and gain a tremendous experience, fill out an application form for participation in Dancing Catalonia 2019!

This website uses cookies to improve your experience while you navigate through the website. Out of these cookies, the cookies that are categorized as necessary are stored on your browser as they are essential for the working of basic functionalities of the website. We also use third-party cookies that help us analyze and understand how you use this website. These cookies will be stored in your browser only with your consent. You also have the option to opt-out of these cookies. But opting out of some of these cookies may have an effect on your browsing experience.
Necessary Always Enabled
Necessary cookies are absolutely essential for the website to function properly. This category only includes cookies that ensures basic functionalities and security features of the website. These cookies do not store any personal information.
Non-necessary
Any cookies that may not be particularly necessary for the website to function and is used specifically to collect user personal data via analytics, ads, other embedded contents are termed as non-necessary cookies. It is mandatory to procure user consent prior to running these cookies on your website.
SAVE & ACCEPT